skip to main | skip to sidebar

If you have a bit older phone, using S60 2nd edition, such as Nokia N70, you have to download FExplorer 2nd edition, for Y-Browser supports no more phones of the 2nd edition.

You may then discover that the fonts are located at z:/system/fonts instead of z:/resource/fonts, so you have to install Japanese fonts at /system/fonts of your card memory

Don't forget to install also a Japanese gdr font by renaming to ceurope.gdr

This blog explains you how to install Japanese fonts on a non Japanese mobile phone so you could use our online Japanese dictionaries at docoja.com/utf8 outside your office or home. 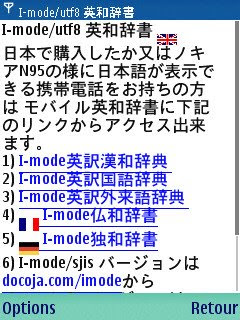 Technically speaking, this method should be workable on any smart phones using Symbian OS/S60 but since Nokia versions are well documented and tested by Japanese folk, we content ourselves with studying the installation on a Nokia E-series and N-series phone.

The method consists in installing Japanese fonts on an extension memory i.e. memory card and giving exactly the same name as system fonts on the phone's inner memory.

The resource on the extension memory having priority over that of the inner memory, your phone will display everything using these Japanese fonts from the next time you switch it on.

Since each Nokia phone model uses different fonts, you have to guess them by using an excellent tool called Y-browser, if your phone is one of the most recent models based on Symbian OS S60 3rd edition (and FExplorer if yours is the 2nd edition as the next post explains)

The program is downloadable from drjukka.com and you can find system fonts at "z:/resource/fonts" in your phone memory.

Please write down on the paper, all the fonts which include "60" on their names excepting for S60ZDIGI.TTF. For European versions of E65, their names should be NOSNR60.TTF, NSSB60.TTF and NSTSB60.TTF 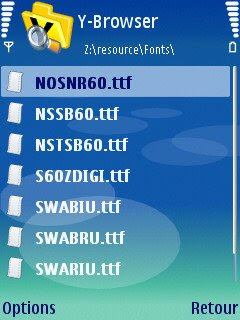 If you cannot install Y-browser because of a security problem, you should authorize the installation of self-signed applications through series of commands: Tools-> App mgr-> Options-> Settings

Now, you need to get Japanese fonts.

Theoretically, you can use any Japanese ttf fonts but we prefer to use heiseigoths60.ttf because it is used by a Japanese version of Nokia phones.

After having installed it on your computer, your font should appear at S60\devices\S60_3rd_FP2_SDK\epoc32\release\winscw\udeb\z\resource\fonts

For E61, you need a Japanese gdr font besides a Japanese ttf font. You can get it from Japanese Fonts for S60 or generate it from a ttf font by using KVT Symbian Font Converter.

Now you have to copy this font onto a phone's flash memory at the directory "resource\fonts" (create it if it doesn't exist) by connecting the memory directly to your computer via a usb port, and not via pc suite.

You rename then this font to the same name as you have noted above (repeat 3 times this operations if you have 3 fonts). For Japanese gdr font in Nokia E61, the name should be ceurope.gdr.

The last step is to insert again this flash memory onto your mobile and switch it on.

Voilà you have a Japanese dictionary on your Nokia phone. Currently English/French/German versions are available. 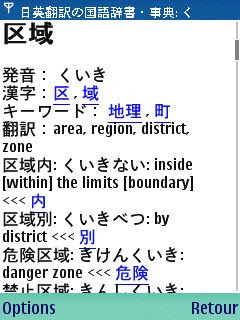